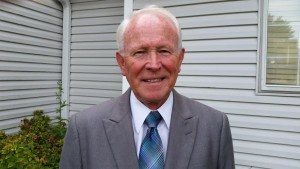 Bio – HL and his wife, Pat, hails from Oklahoma. They have been in the ministry of Evangelism, local Church planting, and missionary work with the Deaf for 12 during their 45 years of ministry.  Bro. HL Champion has pastored churches in Texas, Iowa, Missouri, Virginia, and in Tennessee. He has also served as Youth minister and Staff Evangelist in the earlier years of his ministry. He and Pat have ministered to the Deaf during parts of their ministry.  Both he and Pat attended Oklahoma Baptist University in Shawnee, Oklahoma. Pat attended Liberty University and Bro Champion attended Liberty Baptist Theological Seminary there.  Brother Champion received his Masters and Doctors degrees from Bethel Bible College and Seminary in Greensboro, N.C.

We are grateful to the Lord for their call to begin a new congregation in the Nashville area. They have a special love for new Christians and those who have dropped out of church. Their bible teaching skills are very high.  Dr. Champion loves to witness everywhere he goes. One of his favorite experiences other than winning a soul to Christ is to find someone  who has never heard of John 3:16. He says, ” It is a very great privilege to share the Gospel with some one for the very first time in their life.”  As the owner and Chief Editor of Baptist.org Brother Champion provides a platform for Baptist ministers and Christians all over the world to present their Gospel message.

Bio – Grew up in New Jersey, was saved at a young age of 8, went on to Liberty University and was called to missions on a missions trip to Asia, married a southern girl from Charlotte, NC, we have five children, finished seminary in ’94, went to Asia in 97-2000, 4 years back in the US developing an Asia Outreach program for a small missions agency in VA, after four years returned to Asia in ’04 to developed the Asia side of the program, discipled over 100 local Christian lay-leaders and pastors, helped plant a local indigenous house church. We are currently in the US for a year looking for opportunities to share our ministry and to find more ministry partners.

Bio – The Lord called me into the ministry in 1973 and I studied for the ministry at Bob Jones University in Greenville, South Carolina. Over the years, the Lord has allowed me to be involved in many exciting ministries. I have served as assistant pastor in several churches, done supply work and was involved in the bus ministry for a number of years. These were all part time ministries and I worked a public job. The Lord began dealing with me in 2005 about fulltime ministry. I took early retirement from my public job on April 14, 2006 and trusted the Lord to direct me to the fulltime ministry that he wanted me in. He opened the door for me to join the staff of The Conversion Center, Inc. where I ministered under the leadership of Dr. Edwin G. Moore.

At the definite leading of the Lord, I resigned from The Conversion Center in May of 2008 and started this new ministry, Calvary Ministries To Catholics. These are exciting times and I am looking forward to the Lord opening new areas for this ministry. As he continues to direct my paths, it is my sincere desire to share the precious truths of God’s Holy Word with as many precious Roman Catholics as I can. More than anything else in the world, I would like for Roman Catholics to “know the truth and have the truth make them free.”

BIO:   Buen Consejo.  This name is Spanish for “Good Counsel”.  I got this nick-name while doing a prison ministry, since I speak Spanish fluently.  I am however, not Latino, but a Jew from the tribe of Levi, raised in Judaism. In 1980 I was brought by the old testament scriptures to a saving knowledge of Jesus Christ, the Son of God.  My stand is simple: The scriptures are correct, let’s study them.

Acts 24:14  “But this I confess unto thee, that after the way which they call heresy, so worship I the God of my fathers, believing all things which are written in the law and in the prophets:”