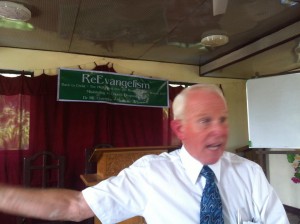 September 14 is the Spiritual Birthday of Dr Champion. At age 15, 56 years ago the event he describes took place. Happy Birthday in Jesus, Servant of God. He is currently in Yangon teaching at the Gospel Baptist Theological Seminary during a 6 week semi annual mission.

In 1957 I ran out of my back door from having a fight with my dad. While in a rage, as a 13 year old son of parents who were Deaf, I experienced hatred for being born to them. I looked up and saw the stars in the sky. I knew the God of the universe was the one who made all things and was responsible for the shame I experienced from many of the other kids whose parents could hear and talk. So, I thought, “I hate God”. I didn’t raise my fists to heaven with that declaration, but I did so with a conscious will and soon forgot about it.

Soon after that it was amazing how profane words became a high interest to me. Being in a home where ASL, American Sign Language, was my means of communication, my vocabulary was two to three years behind my peers. I began to use God’s name in vain, as well as four letter cuss words.

Clearly, I broke purposely two of the Ten Commandments; “Honor thy father and thy mother & “Thou shalt not take the name of the LORD thy God in vain”. I

“Hell” was a new word that I began using among dozens of others. It seemed empowering. One could banish another with disdain to an eternal Hell just like God would do; just by telling them to go there. A friend of mine used it differently. “Eldon”, where are you going?” I asked him one day as he was skipping school. He said with a laugh, “Hell, if I don’t change my ways!” I responded by mimicking the others I had heard say, “I’ll go with you and we can have a party”.

Later that week I was at Eldon’s funeral, after dying from pneumonia. The preacher said that Eldon was in heaven with Jesus. I thought, “Eldon is not in heaven told me where he was going.” A still quiet voice in my heart echoed, “Don’t worry about Eldon; worry about your self!” I trembled at the thought!

A few more instances surfaced in my soul as to my relationship to God being absent. I was selected to be he song leader of a Youth for Christ organization at the James Madison Jr. High School . I was not a church kid but I was leading over 800 of my peers in Christian chorus and songs. This sure made up for my sinful ways of which I have not begun to reveal here. I was aware that I broke others of the Ten Commandments ( Exodus 20:3-17 ). My mom forgot to wake me early on one Friday and I was late for YFC and came in and sat in the back while someone else too my place leading the song service. Boy, was I mad at my stupid Deaf mother. Then the preacher got up and said, “Do you know why God made you? Do you know what God wants from you? And, do you know why Jesus died for you”. I had heard these thoughts though out my childhood but not all them together!

The preacher (he was more of a talker) basically said that God wanted me to love him the same way he loved me! He wants me to be with him for all eternity in Heaven”. “Jesus died because His Father took all of my sins and every transgression I ever committed and poured them on His Son. Jesus died because of my sins and suffered death and hell for me. But, He rose up from the grave and defeated my death and my Hell; because he defeated my Sin! When I saw all of the hands of the student body raised for prayer to accept Christ as Saviour, I raised my hand, too. During the rest of the day, the entire student body was much more subdued and less rowdy. But, no one said anything about the YFC meeting. Nothing changed in me and I was left wondering.

A major one was my Grandmother’s death, when I was 14. My dad and I were standing in front of her in a casket. My dad being Deaf had no knowledge to control his very loud and grievious crying. I reached up and patted him and signed, “Not Worry! See Grandma in Heaven.” He looked down at me with a look of sheer disgust and shook his head, “NO!” violently and increased his expression of pain. I was in shock, about the thought of not seeing Grandma, again or that Dad would not see her again. The preacher said about Eldon, “In my Father’s house were many mansion, and that Jesus prepared him a place there and for all that believe in him.” I didn’t know who was really going there. I didn’t think I was going there.

Carl was the first Christian teenager I ever knew who was for real. He was 17 and I was 15 when some events caused me to ask him if I could go to church with him (Carl threatened a friend who kept using God’s Name in vain). Driving home, he started talking and apologizing about what he had done wrong. I thought he was talking to me. But, he was praying to God; scared me to death! Carl was talking to Jesus just like Jesus was right there in the car with us.

Sunday morning, I asked my mom if I could borrow her Bible, She signed, “Careful – You – Not Lose! I Whip!” Carl picked me up in his 1940 green Chevy, four doors, with a vacuum shift transmission. His three red headed, freckled faced sisters sit in the back seat.

We arrived at the Glenwood Baptist Church on the Sand Springs Line, which is on the west side of Tulsa. Carl went one way to his Sunday School Class and I went a different way to a younger class. The teacher was in his thirties, Wally was his name. I saw some of my school mates there in the 15 year old boys’ class. I was surprised that some of them were religious. They weren’t like Carl. One of them even led in prayer, short, cold, and embarrassed.

Wally asked us all to turn to Acts 16:22-31 and go around the table each reading a verse in sequence. I quickly counted the class members and figured that my verse was Acts 16:30. The story was about Paul and Silas who were thrown into prison for preaching about Jesus. They just sang praises to God and prayed while being shackled; the other prisoners and the jailer listening. At midnight God sent an earthquake and all of the prisoner’s chains were loosed and were free. The Philippian Jailer knew he would be executed for losing even one prisoner. So, he drew a sword to himself to end it quickly. Paul restrained all the prisoners from fleeing and said, “Do thyself no harm”. The Jailer couldn’t take it any more and just dropped to his knees. It was my verse to read now. Verse 30 “And brought them out, and said, Sirs, what must I do to be saved?” Just as I was reading this verse, my heart raced and I knew this was my question. The Sunday School teacher read the answer; in verse 31 And they said, Believe on the Lord Jesus Christ, and thou shalt be saved. . . I knew that while I believed that Jesus was God’s Son I had yet to reach this level of belief. I knew I was not Saved! I fell under conviction that He was the Saviour and I was like the jailer, I was a sinner! Hell to me became very real!

Leaving the class, I walked to the church auditorium knowing I was going to meet God. I just did not know how it worked. Carl was seated in the third pew from the front on the right bank of pews. He was seated with the church basketball team. Carl’s head was bowed with his eyes closed. He was praying to Jesus, again! I reached over to him and nudged him. Not knowing the first thing about Salvation, I said, “Before I leave today, I am going to be a Christian.”

My eyes just burst with tears, “I just don’t want to be a hypocrite” Carl said, “Don’t worry, Jesus will make it real!” I preempted the finishing of the pastor’s sermon and came forward the first time he said that if anyone wanted to become a Christian to respond publically. I quickly left my pew and was standing at the front facing him. He stepped down and said, “Son, what’s on your heart?” I didn’t know what to say!

How does one explain about breaking God’s laws repeatedly, that you don’t want to be banished to Hell, and that you are worthless? How do you explain that you are filthy and God is Holy, and that you want to join up with him? And it had something to do with Jesus? I stood there dumbfounded, not knowing what to say!

Almost simultaneously, Carl arrived and put his arm around me and said to Brother Post, “Champ wants to be Saved!” There it was; the words that said it! ‘I want to be Saved!’ Carl and I knelt beside a altar worker and looked at an open Bible.

For the first time in my short life I saw John 3:16 “For God so loved the world, that he gave his only begotten Son, that whosoever believeth in him should not perish, but have everlasting life.” There it was! I understood!

Other verses were shown to me about my sins, my lostness, my need to repent, and especially how to believe. They showed me Romans 10:9 – 13 that I talk to God from my heart through my mouth about Jesus dying for me and coming alive to save me. I did and He did!

Romans 10:13 “For whosoever shall call upon the name of the Lord, shall be saved.”

Jesus Christ saved my soul that moment. He became my Saviour on the second Sunday of September in 1959. So many things happened to me that I have been discovering for over these 52 years. None of which I am worthy. I praise God that my salvation is irrevocable.

After Hearing of This God, It Was an Easy Decision.

SBC President Fred Luter Responds to Obama’s Win: ‘Our Nation Is In Trouble’