I could sum up in one word why most of us have problems, why we depend on mood altering drugs more than any other generation in history. 23 million Americans battle with Addictions every day and lose, 2 Million people will begin abusing prescription drugs this year alone, 10 % of America’s youth abuse drugs on a Regular basis, 30% of youth under 21 have used alcohol in the last year, 31% of Fundamental Pastors admit to viewing internet pornography in the last year, 69% of Christian school students forsake their faith after graduation. That one word would be “FEAR!” Why are we afraid?  Are we afraid of catching the swine flu? Fear of being sued? The fear of going Broke? Are we afraid of that mole being cancerous? The sound of the clock as it ticks telling us our last day on earth is nearing?  Fear robs us of our happiness for you can’t be happy and afraid at the same time. You can’t think clear and be afraid and you can’t be confident and be afraid. In Matthew 8:1-4 The Disciples had just witnessed the healing of a Leper as he was made clean  Matthew 8:5-13  The Disciples had just witnessed the centurion putting great faith in the Lord Jesus. Matthew 8:14-18  The Disciples had just seen Peter’s mother-n-law healed of a fever by the touch from the Hand of the Lord Jesus.  Now that these disciples had heard and seen all of this did it do them any good? Let’s see!
Matthew 8:23  And when he (Jesus) was entered into a ship, his disciples followed him.The little phrase “follow me” is mentioned 22 times in the N.T. 20 out of those 22 times it is referring to following the Lord. You don’t follow after someone you don’t know. You don’t learn after someone you have no interest in.
Matthew 8:24  And, behold, there arose a great tempestin the sea, insomuch that the ship was covered with the waves: but he was asleep. I am interested in that word “TEMPEST” Strong says the Greek word used is seismos sice-mos’ From G4579; (sei? si’-o Apparently a primary verb; to rock(vibrate, properly sideways or to and fro), that is, (generally) to agitate(in any direction; cause to tremble); figuratively to throw into a tremor(of fear or concern): – move, quake, shake.) a commotion, that is, (of the air) a gale, (of the ground) an earthquake: – earthquake, tempest. Fourteen times that word sice-mos’ is used in the N.T. In every other time the word is used as the word Earthquake. So out of fourteen times it is only used as tempest once. Webster says the word tempest means An extensive current of wind, rushing with great velocity and violence; a storm of extreme violence. I think Matthew was trying to get the message across to us that the storm was in earthquake proportions.
Matthew 8:24  And, behold, there arose a great tempest in the sea, insomuch that the ship was covered with the waves: but he was asleep.  Too often the Christian life is made to sound that it is crisis free.
Matthew 8:23  And when he(Jesus) was entered into a ship, his disciples followed him.  Now finally they are safe they have entered into the ship with Jesus; why you couldn’t be any saver could you? But as we read the next verse notice what it doesn’t say “and behold a great rainbow was seen in the sky, a flock of doves were in happy formation, the sea like glass calm as a cruise on the Caribbean. No, that’s not what we are told. That’s how many think, now that I am saved things will be great never another heart break, always money in the bank account never ever will there be unhappiness in my life. Wait, wait before you get too carried way thinking nothing ever again will go wrong in your life;
John 16:33  These things I have spoken unto you, that in me ye might have peace. In the world ye shall have tribulation: but be of good cheer; I have overcome the world.
James 1:2  My brethren, count it all joy when ye fall into divers temptations; Christians have heart attacks, Battle addictions, Bury their Children, we have incurable diseases and we face fears. Tomorrow we will look closer at this night aboard a ship with Jesus. 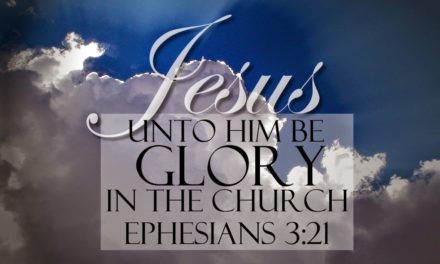 Unto Him be Glory in the Church